Can Thomas and Ronni learn to trust each other while deceiving the enemy? Or will their cunning foe lure them into a dark and deadly trap?

He’ll risk his life in order to protect her…

Seven months after being brutally stabbed, FBI agent Roanna Punto has overcome her PTSD and is ready to return to undercover work…at least what she’s made everyone believe. When the Southern California Violent Crimes Taskforce recruits her to take out a cult leader, Ronni believes getting back in the field will put her demons to rest, but her new partner? He’s the one man she can never trust.

Former spec ops soldier-turned-DEA agent Thomas Mann lives every day with the guilt of having let a killer hurt Ronni. Now she’s on his SoCal turf…and he’ll risk his life in order to protect her. But can he ignore his fantasies about his sexy new partner and do his job?

When their passion ignites while undercover, the truth Ronni’s hiding puts their mission in jeopardy and tests their partnership. Can they learn to trust each other while deceiving the enemy? Or will their cunning foe lure them into a dark and deadly trap? 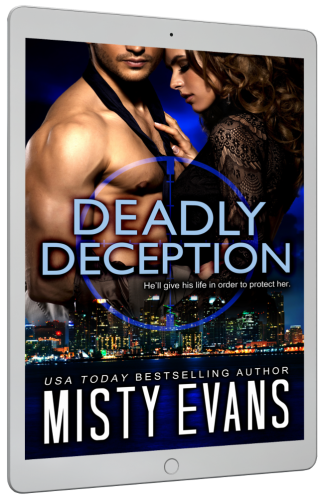 You're viewing: Deadly Deception, SCVC Taskforce Series, Book 2 $3.99
Add to cart
%d bloggers like this:
We use cookies to ensure that we give you the best experience on our website. If you continue to use this site we will assume that you are happy with it.Ok