When a deadly scandal threatens the nation, they’ll have one chance to save the day…and one last chance at love.

Some secrets can kill…

NSA agent Bianca Marx is determined to save her marriage, even if it kills her. Which it just might do since she knows a secret about her estranged husband’s latest mission. A highly-skilled assassin is hot on her trail and the only man who can keep her safe doesn’t want anything to do with her.

She’ll be dead in 24 hours…unless he can save her.

After his marriage failed, Navy SEAL Callan Reese threw himself into his work. On his last black ops mission, three of his men—three good men who counted on him—were killed. Now PTSD and a military investigation have sidelined him…until Bianca shows up. She claims someone high up in the US government wants her dead, and the assassin after her is also after him.

On the run from the very government they serve, Bianca and Cal only have each other. When they uncover a deadly scandal threatening the nation, they’ll have one chance to save the day…and one last chance at love.

“…a fast paced action-filled romantic suspense novel. Every turn of the page surprised me.” ~ Reader review 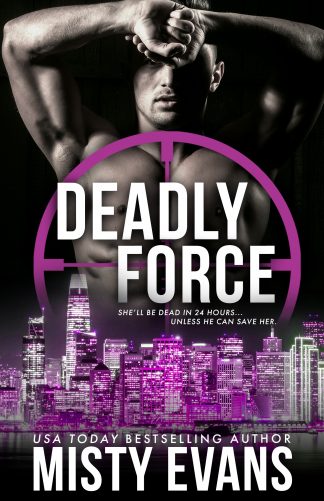