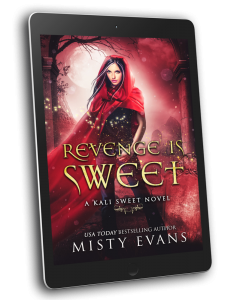 Payback is a bitch and her name is Kali Sweet…

I’m Kali Sweet, the best damn vengeance demon on earth. I work for the supernatural world’s Justice Department and protect innocent humans from otherworldly creatures like me. While I can’t take revenge for myself, I make sure justice is done for others.

But when my latest run-in with Chicago’s vampire king backfires, the fallout leaves me with three big problems: a powerful Undead enemy who wants my head, my boss looking over my shoulder, and three personal blood slaves jeopardizing my reputation.

One of those slaves happens to be sexy rock star Radison Beaumont – the half-human, half-chaos demon who left me at the altar three hundred years ago. Even if he does need my blood now to survive, Rad and I will always be enemies.

Especially since he’s joined an ancient society of demon killers—and the number one demon on their most wanted list is me. 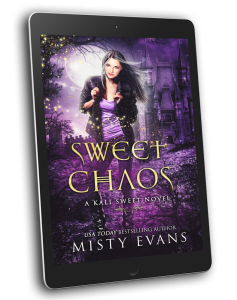 Three hundred years later, the ghosts from her past are hunting for revenge.

As a three-hundred-year old vengeance demon, I’ve made a lot of enemies. The worst was Queen Maria, the Italian Court’s most devious succubus and a ruler who used me as a weapon of mass destruction to inflict pain and kill hundreds of humans in her torture chambers.

Now she’s back, this time as a ghost, and she’s invited a new friend to the party—a vampire king who wants my head on a stake. Together they’re bringing a war to Chicago that will topple the carefully constructed world I’ve protected for centuries.

But I’m Kali Sweet. I never run from my past…and I’m not about to hide from my present. 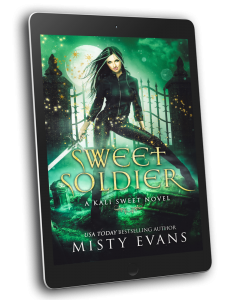 Life is one battle after another…

Armageddon is coming and it’s up to me to stop the Four Horsemen and their heavenly army of angels. Unfortunately, one of the Horsemen happens to be my rock star boyfriend, Radison Beaumont. At least that’s what his ex-fiancée, Parker Burkett, claims.

Parker wants revenge on me for stealing Rad and she’s working with my archenemy, Queen Maria, a succubus who wants me back in her court of supernaturals. The only way I can stop them and the coming biblical apocalypse is to recruit an army – an army led by the king of hell.

Lucifer’s not about to help without getting something in return, and following anyone’s orders – even his – is not my style. I’m turning my inner demon loose on Parker, Maria, and the Horsemen – and saving the humans I love at the same time.

But what price will I pay for dealing with the devil? Going to the dark side has never been so sweet. 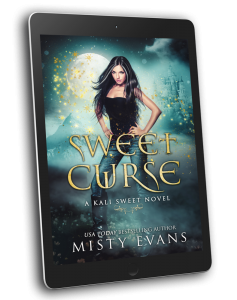 Can Kali keep her band of supernaturals from falling under Archangel Michael’s sword?

Every blessing hides a curse. For me, Kali Sweet, being cursed is my normal state. My horrible flaw of loving humans has landed me a new job—one I don’t particularly like nor want as head of the Bridge Council, entrusted with keeping humans safe from supernaturals.

Lucky me, the job comes with perks—both Lucifer and his big brother Michael are gunning for me. My hand is being forced. Either I kill the King of Hell or Michael will kill everyone I love.

With my ragtag band of demons, vampires, and shifters, I’m about to go up against Heaven and Hell. Blessing or curse? In the end, all that matters is that I keep those I care about alive and safe, even if I’m the one who ends up at the mercy of Michael’s sword.