Skip to content
Happy Friday, everyone. What are your plans for the weekend?
I’m working – shocker, right? Finishing my internal edits on this baby right here! Covert Affairs, SEALs of Shadow Force: Spy Division, Book 4 is releasing October 11th!
Some of you may remember that I met a psychologist for the CIA/SEALs/NSA a few years ago. She was a client of mine in my metaphysical business and had no idea I wrote RS books about spies and SEALs. She was actually married to a spy!
I picked her brain for certain parts of this story, and she was great about telling me stuff (without TELLING me stuff, if you know what I mean). Being an operative is crazy in the real world, and even fiction doesn’t quite do it justice. The pressure these folks are under is extreme, every single day. 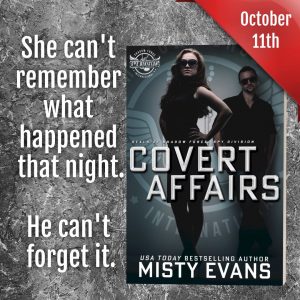 Here is the blurb to give you the gist of the story.
She can’t remember what happened that night in Berlin. He can’t forget it.
NSA psychologist, Dr. Genevieve Montgomery, broke her one cardinal rule—don’t ever fall for a SEAL.
As therapist to special operatives and spies, her brain is filled with secret identities and covert intelligence. When her own cutting-edge hypnotherapy is used on her, she’s branded a traitor, and the man sent to terminate her is the same one she’s fallen in love with.
Ian Kincaid understood what he would face when he became a Navy SEAL. Knew the enemies he would be tasked to eliminate to protect his country, the challenges he would confront. Never did he imagine one of them would be the woman he trusted with his secrets.
One night changes everything between them. Once lovers, they’re now enemies. Can Genevieve prove she’s innocent? Or will Ian have to eliminate this threat to his country—and his heart?
PREORDER LINKS ARE UP!