Chloe and Killion finally give in to their desire for each other in this exclusive behind-closed-doors story. Find out what happens when Chloe willingly yields to the vampire’s kiss, and what this will mean for her and Killion—as well as Death—going forward. 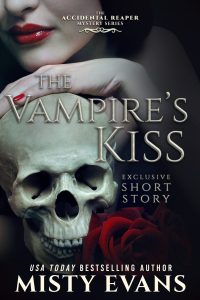 The sexy vampire eyed me across the open space of his living room. He stood behind one of the velvet sofas as if keeping a barrier between us would stop him from attacking me. “Take what you want, Chloe.”

His voice sent warm goosebumps racing across my skin. We’d just come from my place where I’d made the decision to take our relationship to the next stage. I only had a handful of years to live and this is what I wanted.

The hunger in his eyes, in his voice, drew me a step closer. The butler had taken my dog and raven to his quarters on a lower floor, so we had the place to ourselves. No one would disturb us, and we could be as uninhibited as we wished.

A small voice inside my head sent up a warning. Killion was an apex predator, the top of the food chain, and he had an addiction to my grim blood. If I gave in, let him peel off my clothes and do whatever he wanted to my body, would he be able to control his lust for it? Would he kill me by draining every drop I had?

I shoved the idea away and swallowed down my fear. He wouldn’t. No matter how powerful the appetite, he would control it with the same mastery I expected he would use on my body.

“I want you.” The words came out low and ragged, my need growing with every breath.

The flames in the hearth sent warm light over his features. His normally violet irises were an intense shade of amethyst. He didn’t move, preternaturally still. “Take. What. You. Want.”

Of course, he would force me to make the first move, to instruct him, guide him. He would never force, overpower, or restrain me.

Unless that’s what I wanted.

There was a thrill in that thought. That he would always give me the lead, the power, the control. While I hadn’t learned how to fully exercise my own abilities, I was growing faster and stronger by the day. Not many, human or supernatural, could overpower me anymore. Could force me to do their bidding.

If he so wished. He never would without my explicit permission.

He’d once given me a few drops of his blood, making me even more…something. I was already the powerful Grim Zero—the first death dealer to walk this planet—but I wasn’t a vampire. I was other.

I didn’t want to be Undead.

He didn’t want to be a grim.

Yet, he’d tasted my blood, had a craving for it.

A craving that could render me dead.

Once again, I pushed the thought away. This was Killion. My friend, my mentor, my…

The word echoed in my head. I couldn’t label what he was to me, except that single word. Mine.

Facing a predator, my grim magic rose, ready to protect me. Tonight, it only accentuated my need. The ache between my legs became unbearable. Since I had been about to go to bed when Killion had appeared at my apartment, the only thing I wore was my sleep shirt and boy shorts. He had wrapped to me in his trench coat in order to transport me here. With trembling fingers, I peeled off the shirt, slowly, deliberately.

I dropped it to the floor.

Dear reader, please note: This story is for mature readers only and is intended for those 17+. It is ONLY available in Misty’s direct buy store.