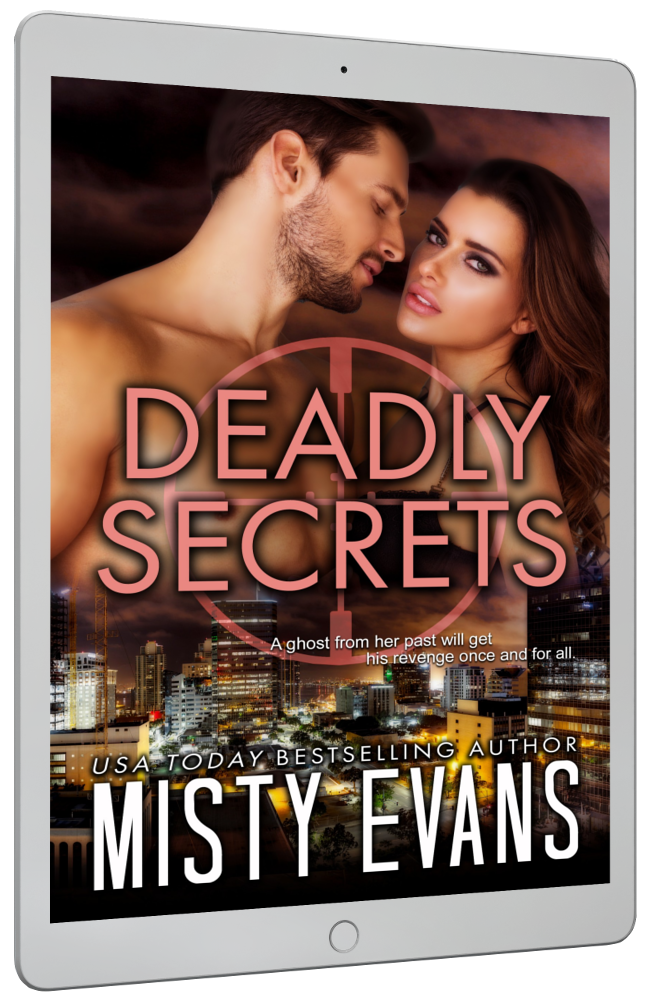 Secrets can get you killed in this riveting story in the SCVC Taskforce romantic suspense series by USA TODAY Bestselling Author, Misty Evans.

He killed her best friend when they were only girls…but she got away.

Three ambulances pulled away in quick succession as Roman drove up to the blocked off area near the church and parked. None of them had their lights on.

They were too late to save anyone.

Before they’d left the hotel, Roman had insisted Brooke change out of her dress and pick up shoes. He wasn’t taking her to a crime scene with nothing on her feet. She hadn’t said much on the drive over and he could see how deeply disturbed she was at the idea of checking out the multiple suicide-homicide with him.

Yes, the parishioners had all committed suicide, but it was the work of The Reverend who’d brainwashed them into doing it.

The Rev wasn’t the first cult leader to convince his followers to do so. Jim Jones was probably the most remembered, convincing over 900 people to commit “revolutionary suicide” and drink poison. Not many years ago, just outside of San Diego, the Heaven’s Gate members had killed themselves in order to enable their souls to jump on board a spaceship following the Hale-Bopp comet.

But Roman didn’t believe The Reverend was a true cult leader—he didn’t spend time gathering a flock and preaching to them or trying to take their money or possessions to amass his own. His targets had neither. He moved swiftly, from one group to the next, seeming to exact some kind of vengeance or justice. He was a serial killer, pure and simple, trying to rid the area of nonwhites, it seemed.

Polly, standing inside the barricades with her tablet in hand, waved him over. He flashed his badge at the police guard and guided Brooke past a group of law enforcement and crime scene techs.

Frizzy hair flying, Polly met them halfway. Roman made quick introductions, Brooke distractedly shaking Polly’s hand as the DTT’s crime scene expert smiled good-naturedly, not missing a beat that Roman had brought her and welcoming Brooke to the team. Brooke didn’t respond other than to ask if they were sure this was the work of The Reverend.

Behind Polly, the small church, once abandoned, looked shabby and rundown in the glare of the lights.

Polly handed Roman the tablet with the details laid out in bulleted points the way he liked. She recited the details out loud for Brooke’s benefit.

Method used to kill victim(s): lethal dose of cyanide in the sacrament cups of grape juice served to each member present.

“Pastor Luke? That’s what they called him?” Several other points were listed, but Roman’s eyes skipped over them and he handed the tablet back to Polly. “Matthew, Mark, Luke. He’s using the apostles in the New Testament. We should have seen that correlation earlier. Put out an update to the team. We need to find any and all pastors that pop up along the coast with a disciple name.”

“First, middle, or last,” Brooke added. She stared at the front of the church where the double doors were propped open and crime scene techs were going in and out. “He may use the apostle name as any of them. John will be next, and I’m guessing there will be a lot of Pastor Johns to vet.”

Roman rubbed his knuckles across his beard. He needed a shave. “If he continues in biblical order.” After the last few days with only five hours of sleep in sum total, he could use an energy drink to offset the exhaustion humming in his veins. “He may not.”

“He will.” Brooke seemed certain. “But it will be a few weeks before he starts amassing his next group of displaced immigrants and nonwhite flock. You’ll have a hard time finding him because of that very type of population. They stay off the grid and, by virtue of their secrecy, so does he.”

“Right,” Polly said, lifting one covert brow at Roman. “Do you want to go inside?”

As her answer, Brooke marched toward the open doors. Roman fell into step beside her and Polly caught up, walking backward and typing on her tablet as she spoke. “Same scene as the previous two. There are sigils on every victim’s forehead, a burnt offering was made, and of course, it’s a full moon.”

They were at the doors; Brooke pulled up short, gaze going skyward. “Burnt offering? Full moon?”

“That’s part of The Rev’s MO.” Polly ushered her through the doors, pointing to a wall just inside the vestibule with a painting of the moon in its various phases. Blood cut a swath across it. “He follows the moon’s cycle and apparently smears someone’s blood over the painting before he leaves.”

The comment was so soft, Roman wasn’t sure he’d heard her correctly. “New? Both of the previous groups had the same painting. He convinces his parishioners that the Second Coming will arrive the night of a full moon and it’s God’s Will that they meet the angels coming to collect their souls.”

Brooke studied the picture. “That’s not biblical though. There are mentions of the moon in the Bible, but not exactly corresponding to sacrifices or the Rapture.”

“The sigils he carves on their foreheads aren’t biblical either.” Polly shot him a look and Roman conceded, “At least, we don’t think they are. That’s why we could use you to confirm it.”

“Are the bodies still here?”

Polly paled slightly. She was a CSI, and damn good at her job, but examining a mass suicide was a lot to stomach for anyone. “In the sanctuary. He delivered communion there.”

Brooke started toward the sanctuary, face a grim mask. “And once they’re dead, he mutilates their bodies and disappears.”

An official police CSI tech with a camera hanging from her neck strap brushed past them. She’d worked with the taskforce before and she called over her shoulder, “Sending the pictures to you, Polly, as soon as Detective Clyffe gives me the all-clear.”

“Thanks, Ferne!” Polly called back.

The green commercial carpeting led them to the sanctuary. Here, too, the doors were pinned open.

“Detective Clyffe?” Brooke asked Roman. “Why is San Diego PD handling the case? Where is the FBI?”

“The Reverend is our case.” He stopped, seeing Clyffe at the head of the main aisle speaking on his phone to someone. Around him were empty wooden pews, the back ones displaying laid out bodies covered with white sheets. “We’re stretched thin so the locals do the discovery work for us and help where they can.”

Brooke hmm’d under her breath and Roman heard the criticism in her tone, although he didn’t know why she cared.

Above the podium, Christ hung on the cross, staring down with sad eyes at the dead who’d died in His name.

“If you don’t need me,” Polly said, clutching her tablet, “I’ll hang out here and notify the rest of the team about the apostle thing.”

Roman nodded, then took Brooke’s elbow to escort her in while waving at Clyffe. “You sure you want to actually look at a body?”

Cooper Harris’s words about Brooke not being a field agent rang in his head. He’d inadvertently lured her here, but now wondered if this was a good idea. All he needed was his potential new expert to go lights out on him once she saw the body. “Polly can show you the pictures. Might be…you know.” Less graphic.

“I’ll be fine.” Brooke’s gaze was glued to the nearest white sheet. Her throat constricted as she swallowed hard. “I need to see what he did to them.”

Her tight voice told him there was something more, something personal here, and it hinted at the doctor already knowing more about this case than he did. Was that possible?

She started forward and he gently touched her arm to stop her. “Have you come across The Rev’s work before?”

“I…” Her hesitation was accompanied by a gray pallor that washed over her face. “I’m familiar with his ritualistic killings.”

Familiar, hell. She looked like she’d seen far too much of this bastard’s signature work. “You’ve worked on a case related to him? Was it for the FBI?”

“Not exactly.” Her throat constricted again. “Let’s just say, I’ve studied him to a certain degree.”

On one hand, Roman knew this was a score for him—finally, he had the expert he’d needed for the past year to complete his team and bring The Rev in.

On the other hand, there was no way he wanted to subject Brooke to the nightmares that accompanied the job he did. The things he’d seen that couldn’t be unseen. Until this moment, he hadn’t realized she might be in the field with him. He’d planned to keep her safe behind a desk, researching homegrown terrorists and those like The Reverend, who committed mass murder on American soil. The Reverend was no different than the Urban Warriors, a gang who blew up federal buildings, or the Outlaws motorcycle gang who killed cops up and down I-5. They all believed they were true Americans, and that those who weren’t should be exterminated.

He let his hand linger on her arm. “Studying him is different than seeing his handiwork up close and personal.”

She scrutinized his face for a moment, her eyes searching his. A ghost of emotion chased across her expression. “Thank you for trying to protect me. I assure you I will not lose it when I see the body under that sheet.”

Tough, controlled, determined. Yep, she was going to be one hell of an asset to his team.

If he didn’t scare her off.

Taking her hand seemed like a natural thing to do as he led her to the body she wanted to examine. At first her fingers stiffened, then she stepped forward with him, her hand cool in his much warmer one. He released her, as together they bent down, he at the victim’s head, and she next to the shoulder.

“Ready?” he asked, because he had to make sure. He knew what waited for them under the sheet.

She took a deep breath and seemed to hold it, giving him a nod.

With a silent prayer for the deceased, he crossed himself—his Irish catholic upbringing still in his blood. Then he peeled back the sheet slowly, revealing the woman underneath.

Dark hair and eyes, probably in her early forties. Blood had dried on the woman’s forehead, outlining the sigil that had been carved there. Her eyes, still open, had a bluish tinge to them and were rolled up into her head. Her mouth showed burns from the poison she’d consumed.

Brooke’s breath came out in a rush. “This poor woman.” She gently touched the woman’s shoulder, and Roman saw a hint of tears in her eyes as she studied the bloody sigil.

Detective Clyffe ended his call and headed their way. Abruptly, Brooke stood and whirled around, heading out of the sanctuary.

“Broo—Dr. Heaton,” Roman called, replacing the sheet and straightening as Clyffe caught up to him.

Brooke kept boogying, leaving him behind. “I’ll be in touch,” she called.

So much for not losing it.

And how exactly, did she think she was getting back to her hotel?

Clyffe shook his hand and started reeling off the facts Polly had already shared and Roman tried to give the man his full attention. His focus, however, kept going to the open doors, waiting for Brooke to come back.

With a sigh, Roman keyed in on the tired, rumpled detective and got to work.

★ Buy direct and SAVE! https://mistyevansbooks.com/product/deadly-secrets-scvc-taskforce-book-7