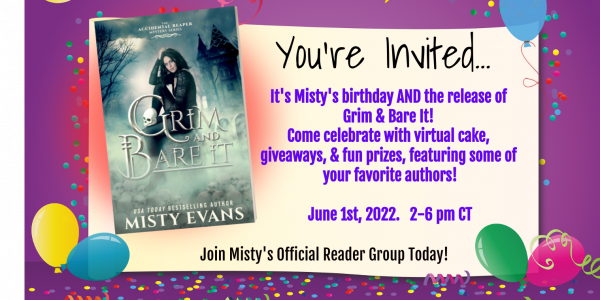 Today is the release of Grim & Bare It, The Accidental Reaper Series, Book 1. I’ve been working on this series (two more full length books release this summer, plus two EXCLUSIVE short stories, as well) since last year.

These books are my <3

It was an interesting decision I had to make about going back to writing Urban Fantasy/Paranormal. When I started out, I wrote three different paranormal series, one of which (Witches Anonymous) might have never seen the light of day, thanks to my agent at that time who read the first story and said, “it’s cute, but it will never sell.” Little did she know!

My romantic suspense books  finally took off around 2013, and became my bread and butter. Since the first RS released in 2008 (Operation Sheba), the majority of my stories have been in that genre.

After the pandemic, I needed to switch gears and find renewed joy in my writing. The background for the Grim 1 cover landed in my lap last year and I had no idea what I was going to do with it, only that I needed to figure it out.

I’ve followed my intuition, yet preorders have been dismal. Even with the extra stories coming out over the next few months, I’ve considered rearranging my schedule to devote more time to two RS projects I’ve had in the works because…ugh. The Doubt Demons are yelling at me, “what if this series crashes and burns? What if it doesn’t sell at all? What if you suck as a writer?”

I haven’t quit writing romantic suspense completely, but the stories I’ve started will take months to complete, even if I work on them every day. The #lifeofawriter – do I write what’s hot in the market, or do I write what I want to, even if it won’t sell as well?

My whole writing world right now is consumed with the characters in The Accidental Reaper Series. I love them. I want to spend every hour of my writing time with them. They’re funny and emotional and I never know what they’ll do next. I even have Death, with a capital D, and he drives me crazy! He’s as unpredictable as they come.

So…I’m going to stick with it and work on their stories until the characters tell me they’re done.

I had a teacher once assign me the word “perseverance” for a speech. It’s been a guiding principle of mine ever since. BTW, he also once told me I was a trooper, than I didn’t quit when my heart was really in something.

My heart is really in this.

So today, if you’re on Facebook and you want to join me in celebrating the release of my 78th book, come join my private reader group and celebrate with me and 14 other authors. www.facebook.com/groups/223349495973783/

We’re giving away prizes and having fun. There’s no pressure to stay in the group after the party. I just want to share my love of this series with you.

Through the years, many of you have supported my dream to be a published author. I still remember my first book signing and those of you who attended. I remember the fellow writers I met in online and in-person writing groups. My mentors, my critique partners, my cheerleaders. My husband and kids, who never lost faith in me, even when I lost faith in myself.

I never imagined I would be here, where I am right now. That I would be a USA Today bestselling author, or living my dream. I can’t thank ALL of you enough. It takes a village, as they say, and I believe my books have a piece of all of you in them.

Being an author is the best job ever!