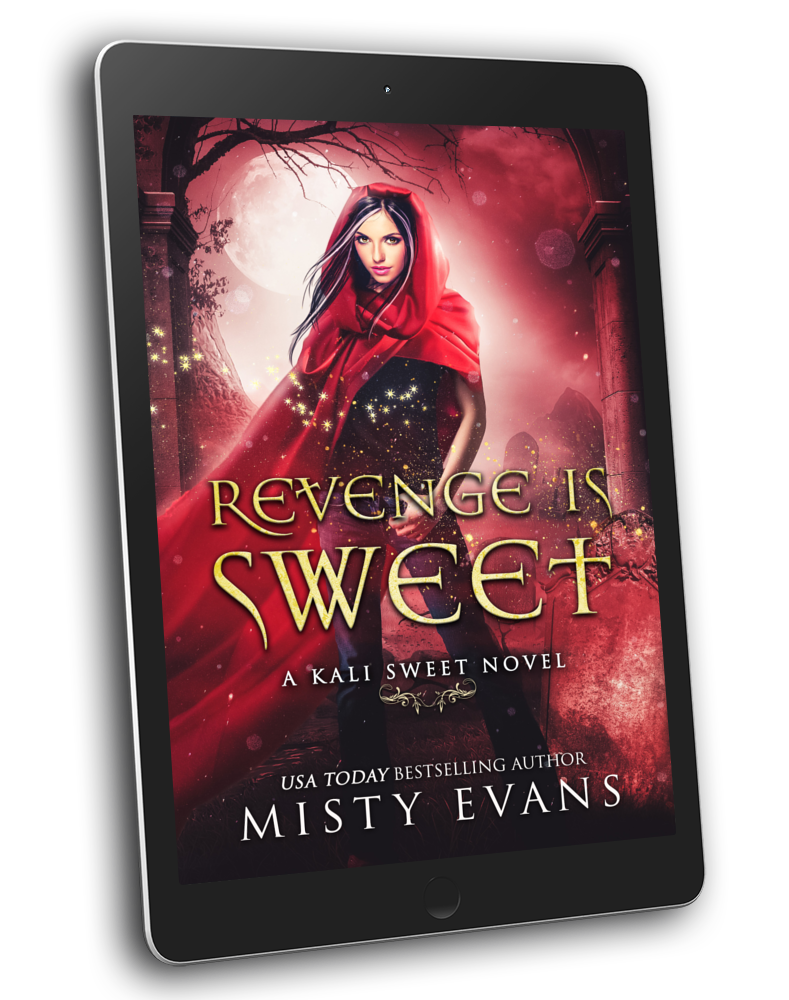 I’m Kali Sweet, the best damn vengeance demon on earth. I work for the supernatural world’s Justice Department and protect innocent humans from otherworldly creatures like me. While I can’t take revenge for myself, I make sure justice is done for others.

But when my latest run-in with Chicago’s vampire king backfires, the fallout leaves me with three big problems: a powerful Undead enemy who wants my head, my boss looking over my shoulder, and three personal blood slaves jeopardizing my reputation.

Raj Nudra, Vampire King of the Central United States, was waiting for me.

Seated behind a mammoth black desk, Nudra appraised me with flat reddish-brown eyes. Two of his minions flanked his sides, arms crossed, weapons in plain sight. Low level demons, good for muscle but who couldn’t think their way out of a coffin.

Nudra leaned back in his chair, long black hair falling across his shoulders as his feminine lips curved up into a smug smile. “Kalina Dolce, what brings you here? Hoping to score front row seats to the concert?” He pointed to a couple of tickets on his desk and then to a bright orange lanyard with a plastic ID protector. “Or perhaps a backstage pass? Word has it, you were once sweet—no pun intended—on Rad Beaumont. If you’re looking to hook up again…” He let the suggestion hang in the air.

No one had called me Kalina Dolce since I’d left Rome in 1910. Kali Sweet was more modern, more American, and it didn’t remind me every day of what had happened to my family and friends. Didn’t make me catch my breath in fear when someone called me by it, or make my gut cramp with guilt when I saw it written on a random envelope in the mail pile.

I shut down the bloody memory the name called up. Now wasn’t the time to revisit the past. In fact, it was never a good time to visit the past. Under the circumstances, however, I recognized Nudra’s one-two punch. He’d caught me off guard with his use of my old name and knowledge about my relationship with Rad. He obviously had anticipated my visit and planned accordingly.

Rule one when dealing with vampires, always have a ready escape. Leaving the door open, I removed my Bridge badge from the inside pocket of my cape, regaining my composure as I did so. The weight of the shield reassured me. The way the overhead light bounced off the gold reminded me of the responsibility I held. Nudra was king of a bunch of undead vamps. Big deal. I was a member of the Bridge Council and the best damn vengeance demon on the face of planet Earth.

I shoved my badge in his face. Sniffed the air as if he stunk as I flicked the hood off my head. Italian flair, check.

Offense taken, he straightened ever so subtly as I glared down at him. “You’ve crossed the line with humans again, using them as blood slaves. Trafficking them across state lines and selling them to the highest bidders. That’s two strikes this year. One more, and…”

“You’ll send me to my coffin for a time out?”

“One more, and the next time you see me, I’ll have pliers in my hand.”

His flat eyes sized me up, and then he tsked. “Such an inhumane way to remove my fangs.”

I fished the written warning out of my back skirt pocket and tossed it on the top of his desk. “They’re not for your fangs, buddy boy.” American snarkiness, check. “They’re for your balls.”

I grabbed my crotch to emphasize my point before backing toward the door. Rule number two, never, ever turn your back on a vamp, especially when threatening his vamphood. “I take your balls, you lose your sex drive, and with it your bloodlust will decrease by ninety-nine percent. You’ll stop preying on human girls and boys, and a king with no sac is nothing but a figurehead, so you can wave bye-bye to all this power you’ve amassed. The Council will divide up your kingdom among the other American vampire rulers and your fortune will be doled out to the blood slaves as restitution.”

While his DNA gave his skin a warm tone, the vampire disease paled it. The result was a taupey gray, making it impossible to discern whether or not my words were sinking in.

Nudra leaned forward in his chair. “How surprising the Council sends you, its heart and soul, to do its dirty work.” Instantly, I felt his power rising around both of us. Sexual power, blood lust, desire all mixed together. “I could use someone like you in my organization, Kalina. Someone with your strength, your influence. That zest for humans you have fits perfectly with mine. The compensation, of course, would be exemplary. You would have everything you ever wanted.”

There was only one thing I wanted, and no one, not even God Himself, could give that to me. Once a demon, always a demon.

I stopped in the doorway. “My name is Kali Sweet.” Holding up two fingers, I made snipping motions. “Don’t forget it or I’ll tattoo it into your skin when I cut off your balls.”

My nerves jangled as loud as the music in the walls as I moved quickly into the hallway and continued to back toward the stairs. Threatening a vampire king was stupid, but running a human blood slave business was unforgivable, and if it had been me making the call, I would have staked him on the spot. The Council, however, existed for this very reason. Vigilante justice created more problems than it solved.

No surprise, Nudra’s minions darted out of the office after me a few seconds later, weapons drawn. Vampire king bluster, check. Guns won’t kill me, but bullets will slow me down. And they hurt like hell.

Adrenaline pumping, I hit the bar of the stairway’s door hard with my backside to push it open. I didn’t want to engage the minions, but I reached for my trusty whip, curled around my left arm like a bracelet anyway.

I’d just turned to run down the stairs when I smacked into a solid wall.

Where did that come from, my brain screamed as the impact sent me backwards on my butt, back hitting the cold concrete wall and knocking the wind out of me. A guitar landed at my feet, making a funny twanging noise as if someone had run unskilled fingers over the strings.

A vaguely familiar, surprised sounding voice said, “Kali?” and I looked up to see my daily nightmare standing there in the flesh.

Radison Beaumont, in too-worn jeans and a too-tight black T-shirt, gave me a slow once-over with his beautiful gold-colored eyes before his lips quirked to one side in a smile that sent my already hammering heart into overdrive. Beating like a battering ram inside my chest, it rang in my ears and drowned out the bass drum echoing in the stairwell.

My skirt had flipped up to reveal an expanse of skin between the top of my boots and my underwear and Rad’s gaze lingered between my legs a second too long before lifting to meet mine. Dozens of warnings went off in my head, but damn if I could find my voice or my extensive repertoire of Italian curse words. I couldn’t even find my breath. He looked a little older than the last time I’d seen him, but still perfect to me in every way. Thick black hair, a little too long and mussed, those gorgeous eyes, flawless skin and teeth. Not to mention faultless proportions. Like they’d done every other time I was in the near vicinity of him, my body, mind and heart staged a coup. Traitors.

While it seemed like an eternity before he spoke, it was in reality only another beat of my heart. He held out one long, perfect hand and in his eyes I saw it was more than just an offer to help me to my feet. It was an olive branch. A peace treaty. “I can’t believe you’re here. Did you come to see m—” He caught himself, thought better of it. “Did you come for the concert?”

It would have been easy, so easy, to slip my hand into his. To forget the past under the spell of those mesmerizing eyes and allow him to help me up. Instead, I pushed myself off the ground, keeping my back against the wall and shoved my skirt back into place.

Before I could answer, Nudra’s minions barreled through the door and nearly knocked Rad and me both down the stairs. As the first one reached for me, Rad snapped his fingers and the guitar on the ground jerked upward, tripping the demon and sending him flying face first onto the top stair. Being half-chaos demon, causing trouble was as easy as breathing to Rad.

He turned on the second bodyguard and the demon held up his hands and stepped back. Smart. He must have known Rad could bring the entire building down on him if he wanted to. The demon disappeared through the door, a soft clicking sound resonating in the now silent stairwell as the latch snapped into place. My breathing sounded too loud in my ears. The demon at my feet moaned, but didn’t move.

As if nothing had happened, Rad turned to me, a smile tugging the skin over the fine bones of his cheeks. Two dimples sprang to life. “Your hair. It’s…different.”

“Seriously?” I righted my cape, which had twisted to the left when I fell. I kicked the demon on the stairs out of the way. “That’s the best you’ve got after standing me up at the altar three-hundred years ago? My hair is different?”

“It was two-hundred eighty-five years and three days ago.” His golden eyes darkened and he grabbed me around the waist, jerking me up against his rock-hard body. His gaze dropped to my lips and I was suddenly seventeen again. “And this is the best way I can think of to say I’m sorry.”

Before I understood what he was about to do, il pistolino lowered his half-demon, half-human lips to mine and kissed me.

Books in the series: