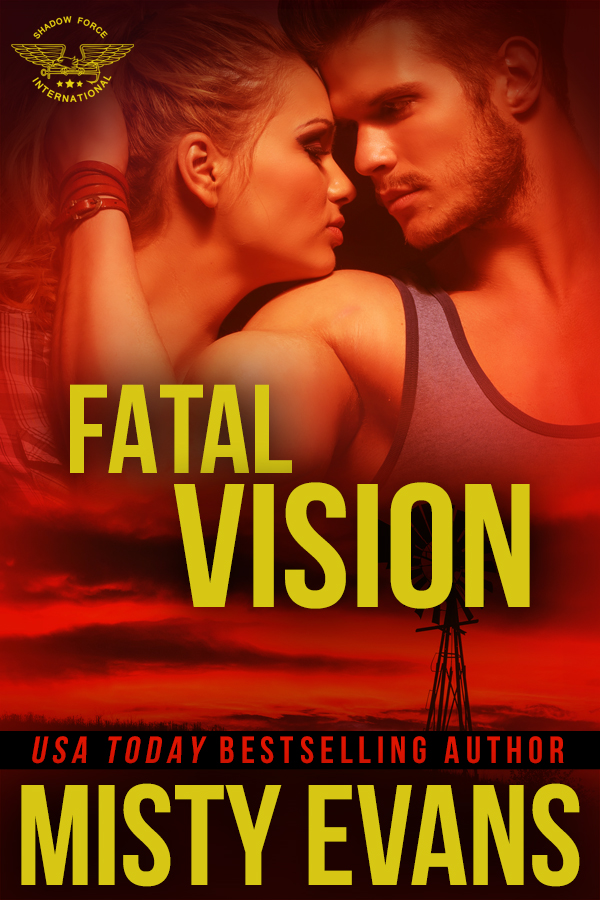 In this fifth book in the SEALs of Shadow Force series, Colton and Shelby face family issues, a serial killer bent on revenge, second chances, and are joined by Connor and Sabrina from Fatal Love!

“The love scenes were smokin’ hot!”

Colton swung back into the kitchen, two shirts in hand. He eyed the buttons on her blouse. “You need a hand getting that off?”

For a second, Shelby wasn’t sure if he was serious or just teasing. The look in his eyes—the same heat from before—told her he was serious all right.

He wanted to unbutton her blouse and help her out of it.

Not because he was being nice or thought she couldn’t work the buttons on her shirt.

Evil man. “Just because my leg is screwed up doesn’t mean I can’t dress myself.”

He tossed the fresh shirt on the table, then reached out to finger the collar of her blouse. “Was thinking more about the undressing part. Can you do it on your own?”

Her nipples hardened and she licked her lips. “Is that part of my therapy? Showing you I can unbutton my shirt?”

A wicked grin lit his face. “I need to do a full evaluation of what you can and can’t handle.”

The desire pulsing at the base of her spine moved lower. At the same time, she undid the top button.

This was such a bad idea, but this is what they did—teased, played, and had fun. Until the fun was over and reality came calling.

When it was just the two of them, they were perfect together. As soon as her family, friends, or job entered the picture, there was nothing but anger, hurt, and arguing.

As if he could see the mental war going on in her head, he upped the ante—he shucked off his own shirt.

And oh, my. What a beautiful man he was, even with the scars crisscrossing his chest and belly. His broad shoulders bunched as he wadded up the coffee-stained shirt and tossed it on the table, his steely gaze once again challenging her in a totally different way.

Her hand went to the second button on her blouse, toying with it, watching the effect the promise of something more had on him. He knew as well as she did that nothing good could come from them lowering their defenses and seeking comfort in each other’s arms, but hell if that had ever stopped either of them from giving in to their passion.

Sex with Colton had always been good—not just good, great. Eighteen months was a long time to go without that kind of pleasure, without him, yet she hadn’t even considered hooking up with anyone else. Couldn’t consider starting over with someone new.

Jaya had tried setting her up more than once. Shelby appreciated her friend’s compassion and determination, but most times, she never even made it to the first date. Same with her mom, pushing her toward Daniel. A good man, but no one else was Colton.

Even now, he knew she needed to control the flow and pace of this dance with the devil. She was no amateur—she knew the price of crossing the point of no return with him. He wasn’t about to push her into anything. This was her choice. All he was doing was putting it out there. Offering to make her a very happy woman for a few hours.

Was she willing to let him?

Her body screamed yes, yes, yes. Goading, demanding. It remembered all too well how amazing he could make her feel.

Her heart, though…that was an altogether different thing. Wait, wait, wait, it cried. It didn’t want to be hurt again.

Because surrendering her body to Colton was one thing, but she couldn’t separate her heart from it. If she plunged into heedless abandon with him, her heart would pay the price.

Logic attempted to marry the two, reminding her that a drop-dead gorgeous man, one who wanted to protect her and maybe still loved her, was standing there in front of her, half-naked and willing to do anything she wanted.

Shelby was no fool. She reached for him.

He caught her hand, intertwining his fingers with hers, and once again went to his knees in front of her.

A rush of pure, unadulterated power ran through her veins. Having this man—a former SEAL and the most incredible lover a gal could ask for—kneel in front of her was as thrilling as any moment she’d ever had on the beauty pageant circuit, as intoxicating as any case she’d ever worked for the FBI. He was hers. All hers. He might have teased her relentlessly about being a beauty queen, but he loved giving her anything she wanted.

Right now, she wanted him.

And he knew it.

Slowly, she drew him toward her, leaning down to offer a kiss to seal her pact with the devil.

Category: Uncategorized
Leave a Reply Cancel reply
We use cookies to ensure that we give you the best experience on our website. If you continue to use this site we will assume that you are happy with it.Ok